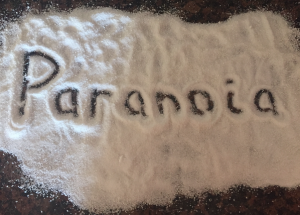 Cocaine Can Cause Paranoia.

We see this everyday. It is such a nasty drug that people need to understand some of the dark side it delivers. Read on with some stories from clients.

Are you aware of how cocaine lies to you. It promises everything but only gives minimal good feelings and a lot of shit to follow.

You go in a trance of thinking “I want some, it’ll be great” but you fail to connect the dots of how it really makes you feel.

You lose days recovering and feel crap on Mondays…

But what about the paranoia, the thinking someone is after you or insects crawling under the skin feelings or the low moods and negative thoughts.

You will have your own unique experience.

One client had taken a load of coke and was convinced some people in the bar of his pub was dissing him. It took all of the might of a friend and his partner to keep him in the kitchen as he’d picked up a knife and was going to sort the ‘dissers’ out.

His partner had, had enough. 48 hours later when they came to me, he had no recollection of this, but was shit scared of what could have happened if they hadn’t stopped him.

I helped him and he is clean to this day and happier too.

Or start with our FREE Quit Cocaine Online Course Here.

Another client jumped off a bridge running scared as he believed he was being chased. A broken leg and wrist was the result. He was lucky, could have been much worse.

I wonder how many accidents, stabbings have happened when someone is on cocaine.

“I had to stay low, I would be safe then. I got upstairs like a snake up each stair and lay at the side below my bed, terrified. The bed was too high, they could get me there. I thought my only chance of survival was to stay very, very still. I was there for an eternity.”

Cocaine plays with your mind. She had realised coke was doing more damage than pleasure. She feared if she didn’t do something, she would be back on it again Friday.

She is free now from her weekend habit, healthier, happier and richer.

Or book your double breakthrough freedom from cocaine and paranoia here.

Having trained in hypnotherapy and NLP since 1993 Debbie has assisted on over 60 NLP & Hypnosis courses as well as teaching students herself. She has a keen interest in helping people with addictions. "Debbie Williams is a skilled and effective NLP trainer and hypnotherapist" Paul McKenna
View all posts by Debbie Williams →

One Line Of Cocaine Will Be Ok ?
Can Cocaine Kill You ?

If she is with a client, please leave a short message along with the best time(s) to call you back.